Y5 took part in the Maghull and District Schools Y5 hockey tournament competing against 5 other local schools. We didn’t know what to expect having not played hockey matches before, but they all took to it straight away winning their first game 2-0 against Davenhill. This was followed by 2-0 against St Gregory’s, 3-0 against Green Park and a very enjoyable 4-0 against St. John Bosco. The last match we took our foot off the gas and only managed a 1-0 win against St Andrews.

So 5 games played, all won, 12 goals scored, 0 conceded and a tournament win ! Absolutely fantastic from the 5 players who were Dylan, Ethan, Chloe H, Brogan and Poppy. Every player was fantastic in defence and attack, but a special mention for Poppy who scored  9 of the goals, or maybe it was 10 ! Huge well done to you all. You will be able to collect the winning trophy at the sports award presentation evening at the end of the school year.

5 a side Football Tournaments

The girls football team took part in a 5 a side tournament reaching the semi-final stage. This was a great effort as the team were missing 2 of their best players through illness and injury. Very well done to all the girls from Y4 and Y5 who took part; Harriet, Brogan, Chloe, Sophia, Bella and Poppy. We are sure you will go back next year and do even better !

The boys football team also took part in the Maghull and District 5-a-side tournament reaching the semi-finals. There was real disappointment when they were winning their semi-final with seconds to go, but then conceding a late goal leading to a penalty shoot-out. Unfortunately, it wasn’t to be and we all left feeling deflated. However, the boys had played really well and should be very proud of their performance.

Children from Y4, Y5 and Y6 took part in the Maghull and District cross country run at Maricourt School. Well done to all 20 children who took part and especially to Geva (Y4) and George (Y5) who were given medals for top 3 finishes.

We were delighted to get back to playing some competitive school sport following the unwelcome break caused by the Covid pandemic. The boys football team were fantastic, dropping only 2 points on their way to winning the league for the first time in many years. (Even Mr. Millington can’t recall the previous time !)

They also reached the Cup final and a report on the final follows…….

On Monday 12th July, the day after the disappointment of England losing to Italy in Euro 2020, our school team played in the final of the MADCOS Cup at Summerhill Primary School. Melling had already secured the league, but we knew that wouldn't feel as good if we hadn't won the cup also.

The build-up to the match was very nervous, with Y6 having to stay at home for a few days due to Covid rules but they returned just in time for the match. Then there was the rain.... Lots of excited but wet supporters congregated on both sides of the pitch and Ms Ainsworth-Brown's Melling umbrella came in very useful !

It was clear from the kick-off that it was going to be a tough,competitive match between the two best school teams in the league this season. Melling took the lead after 8 minutes when Kole got free of his marker and fired home from a tight angle. A second goal followed shortly afterwards again from Kole, but this was quickly followed by a Summerhill goal which left the half-time score at 2-1 to Melling.

Into the second half and Melling pushed for an all important third goal. James, Ivan and Joseph all went close but it wasn't all one way traffic as Summerhill also created chances. Mellings defence was strong with important saves from Lewis and strong defence from Max, Stephen and Billy to keep them out. With 10 minutes to go, an excellent finish from Kole after a corner completed his excellent hat-trick and the celebrations by the corner flag suggested Melling thought they had the game won.

Summerhill had other ideas though and scored to bring the score back to 3-2. At this point, they were looking like the strongest team. Reinforcements were needed and the fresh legs of Isaac and Joshua (shinnies) helped, with Isaac coming close to a fourth Melling goal. Into the last minute and a final Summerhill chance to equalise was denied by an outstanding sliding tackle from Max.

The final whistle went with Melling winning 3-2. The celebrations that followed were epic with subs John-James and Bobby who had been important members of the squad joining in enthusiastically. For the boys who had played for the team since Y4, we had hoped this moment would come, but they had to make it happen and they did.

We send our thanks to Summerhill for providing the opposition and being such generous hosts. Well done to everyone who took part. Your coaches at the teams you play for have done a fantastic job and I know I am speaking for Mr. Cleaver and Mr. Fawcett also when I say how pleased and proud of you we all were.

Our school girls football team enjoyed the opportunity to play 2 matches this year. With most of the team being from Y4, they will have many more opportunities to play matches in the next couple of years.

We entered two teams into the Maghull and District Netball tournament at Maricourt school, with one team winning the competition. Congratulations to team members James, Isla, Lyla, Joseph and Millie. They played as a real team with lots of encouragement and fair play.

The school cricket team played in the final of the Maghull and District tournament at Maghull Cricket Club. They were narrowly beaten, but enjoyed playing cricket, with some of the team now attending training and playing for Maghull CC.

In October, children from our Y5 class took part in the Maghull and District hockey tournament hosted by Maricourt High School. There was only a very limited opportunity for any practice beforehand, but the team clicked straight away and won all of their matches to finish as winners! Very well done to team members from Y5; Stephen, Joseph, Eleanor and Isla. 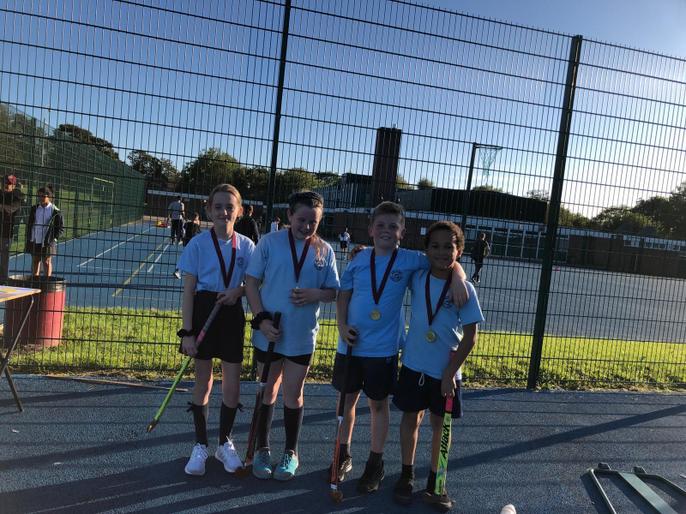 Competition for places in the squad for the school football team this season has been fierce, but we now have a strong group who have played very well in their first 2 matches. The majority of the team also played last year and that experience has helped them. They won their first match against St Gregory’s 3-2 and were then beaten 2-1 by St John Bosco in a fantastic match when a draw would have been a fair result. There are plenty more matches to play when the nights start to get lighter and the squad are looking forward to playing on our home pitch. Well done to all who have played so far:Khalel, Barney, Finley, Lucy, Rosa,Kole, Ivan, James, Max, Joseph, Stephen and Lewis.

The girls football team have added to their success from last season. They won the Maghull and District Active Soccer tournament by winning every match. We also entered a Y3 team in this tournament who did really well against much older teams. Hopefully, they will be back in a few years to win it again and continue the tradition of Melling success in girls football. The Y6 team’s victory meant they qualified to play in the regional finals of the ESFA national tournament. They won their group to qualify for the semi-final where they were very unlucky to lose to a last minute penalty. Very proud squad members are Lucy, Rosa, Lucy, Lexi, Mia, Millie, Marni and Evie. 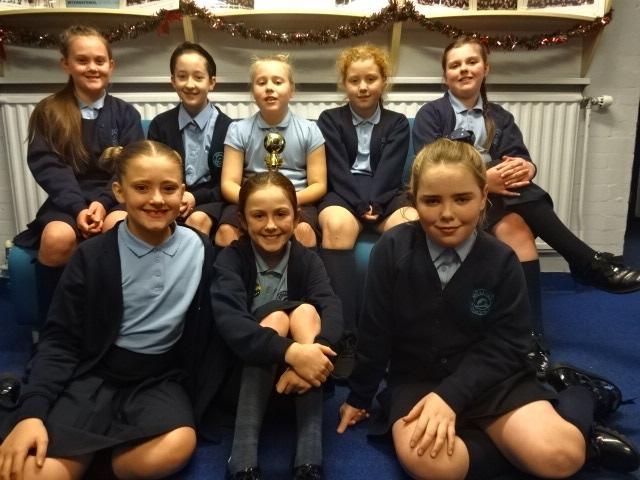 Last Thursday saw our Y5/6 girls football team taking part in the Merseyside regional final of the national primary school girls football competition. They had done fantastically well to qualify for the competition and this was bound to be a step up in ability. The first match went to plan and some solid defending and goalkeeping, followed by a goal from Mia led to a victory. The second match was against a very strong Malvern team, whose star player was also the star player for their boys' team ! Melling were always in the game, but in the end Malvern won with two late goals. The final game was dominated by Melling, but they couldn't quite get the victory they deserved and it finished 0-0. The girls had to settle for an excellent 2nd place and medals to take home ! A brilliant effort and yet again we are really proud of the way you competed and played as a team against some very good opponents. Fantastic !

Congratulations to our Y5/6 girls' football team who won the Maghull and District Girls Football tournament last week. Our older team won 4 out of 4 matches that they played, including beating St. George's 11-0 and  St. John Bosco 5-0! A very well-deserved victory!

Also, special mention must go to our Y3/4 team who beat Green Park's Y6 team to get to the semi-final. Unfortunately they then came up against our older team in that match, and although they lost, they did have the honour of being the only team to score against them ! Well done Lucy !

Some very happy parents were there to spectate! Well done, girls-your determination, skill and team work make us very proud. They now go on to represent Maghull and District in the regional stages of the English Schools Football Association national tournament ! Good luck girls !

Links To Other Sports Clubs